When we moved our three Uhaul-fuls of big stuff to the new house we opted to wait on moving the washer and dryer down to the basement. After thirty minutes of psyching himself up, Jeremiah got the wheels of the dolly just barely over the first step and suddenly declared “Nope. Never mind. I don’t think this is a good idea.” The problem is this: 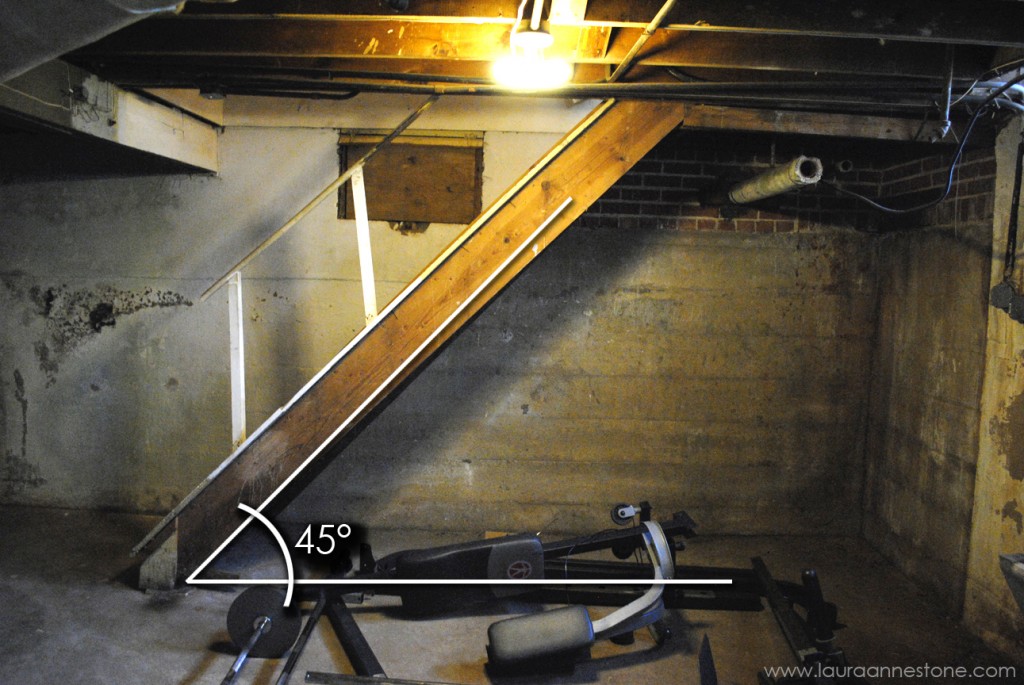 So we opted to park the washer and dryer in the garage until another day.

Sunday was that day.

After about an hour and a half of hustle and bustle, I finally heard the reassuring sounds of Jeremiah telling himself that this plan was the best plan ever, followed by his announcement to the dogs and me, “This is definitely going to work. Trust me, I’m an engineer.” 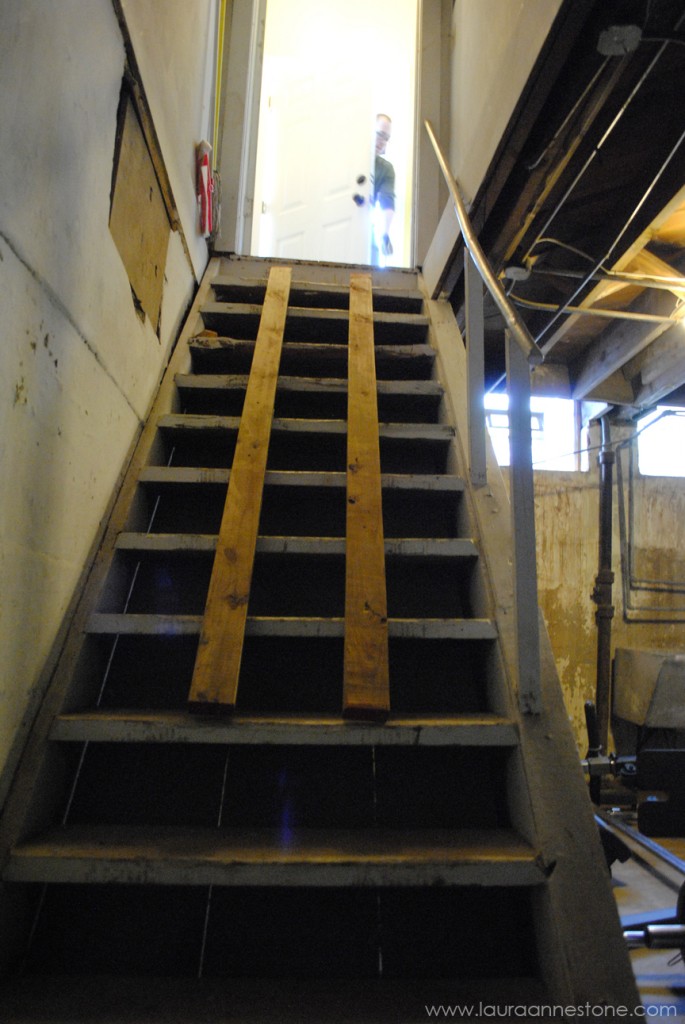 The plan was to screw 2x4s to the stairs as skid rails, wrap the washer and dryer in old blankets, then use a rope to lower them down. Thankfully we ran across an old pulley in a creepy crawlspace to give us a little mechanical advantage. 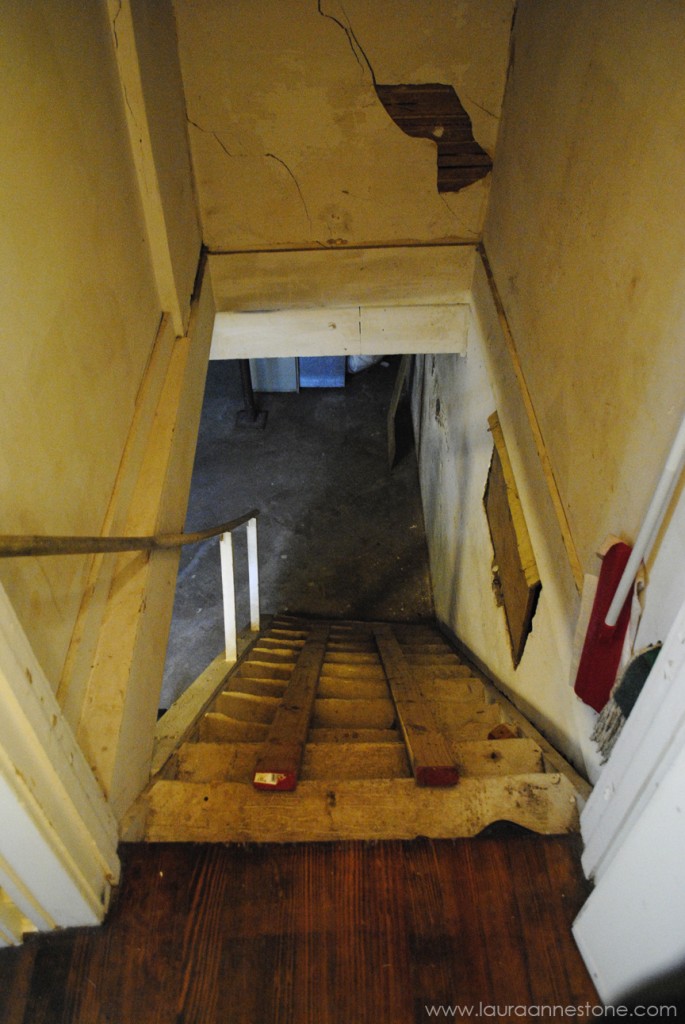 Everything worked about half as well as planned. The dolly was squeaking and complaining even before we made it over the back door porch steps, the blankets wouldn’t stay put, the rope wouldn’t stay tied…. but the questionable old pulley worked exactly as planned. 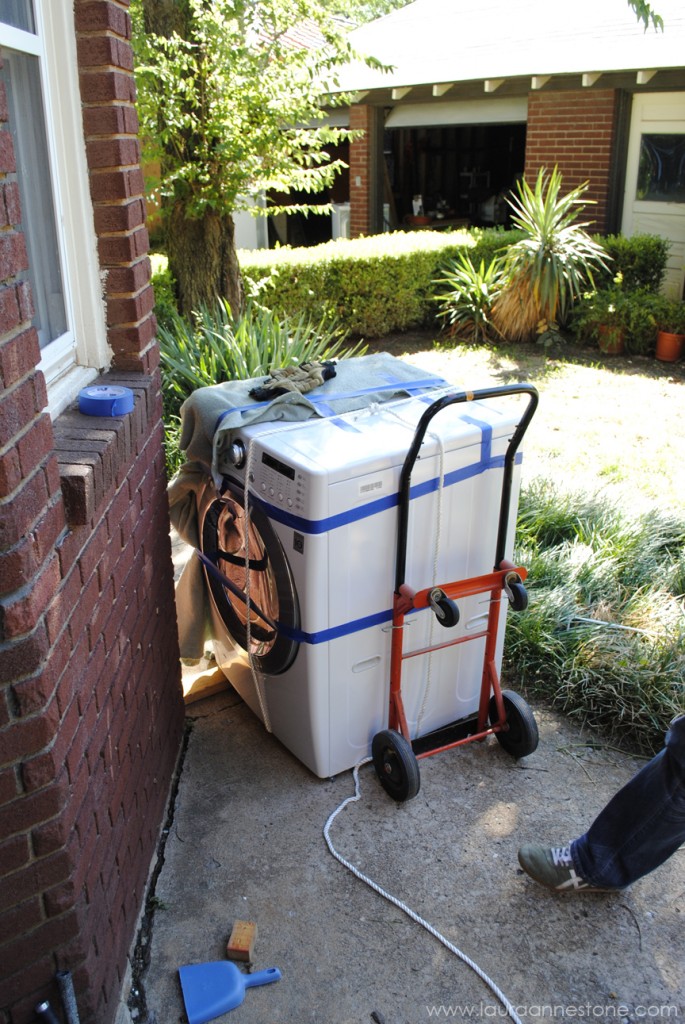 Over the porch steps. One last rope check. 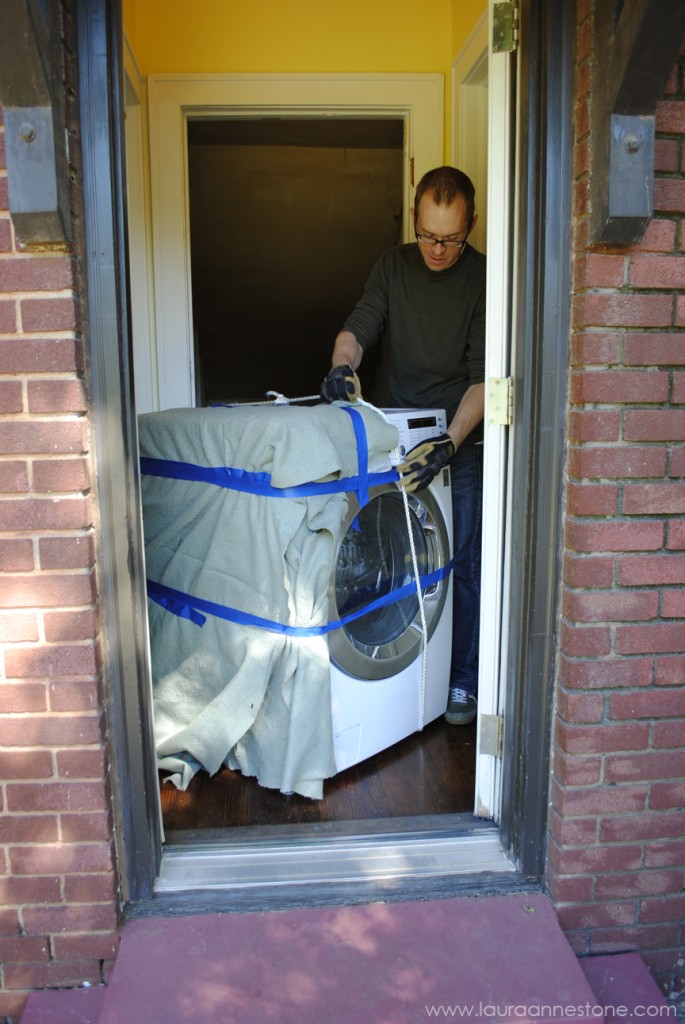 Don’t worry little buddy… you can trust him, he’s an engineer. 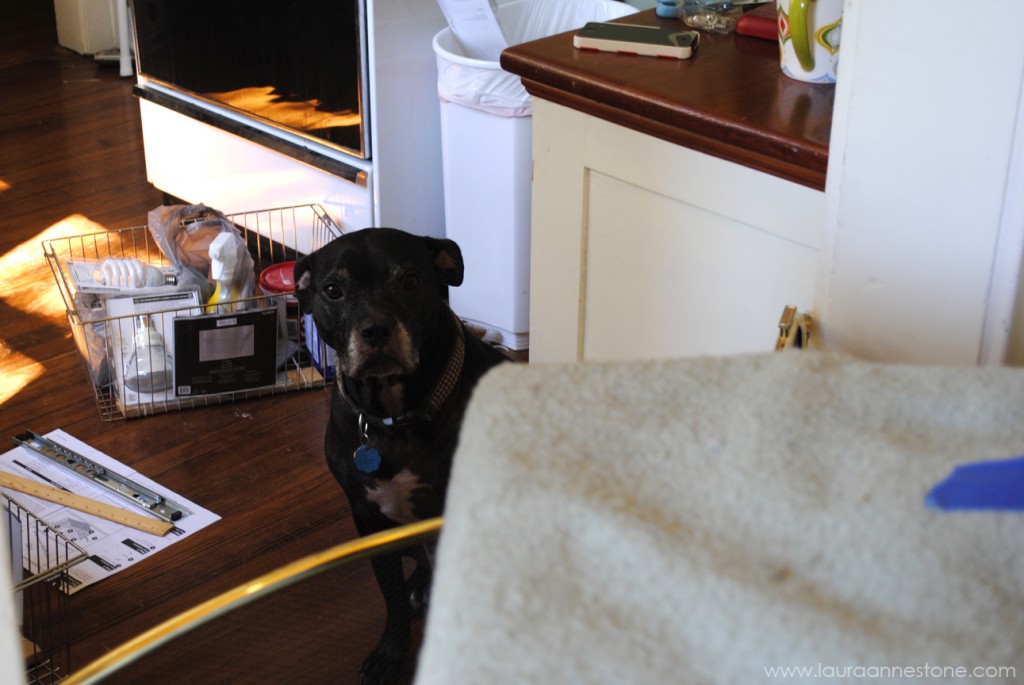 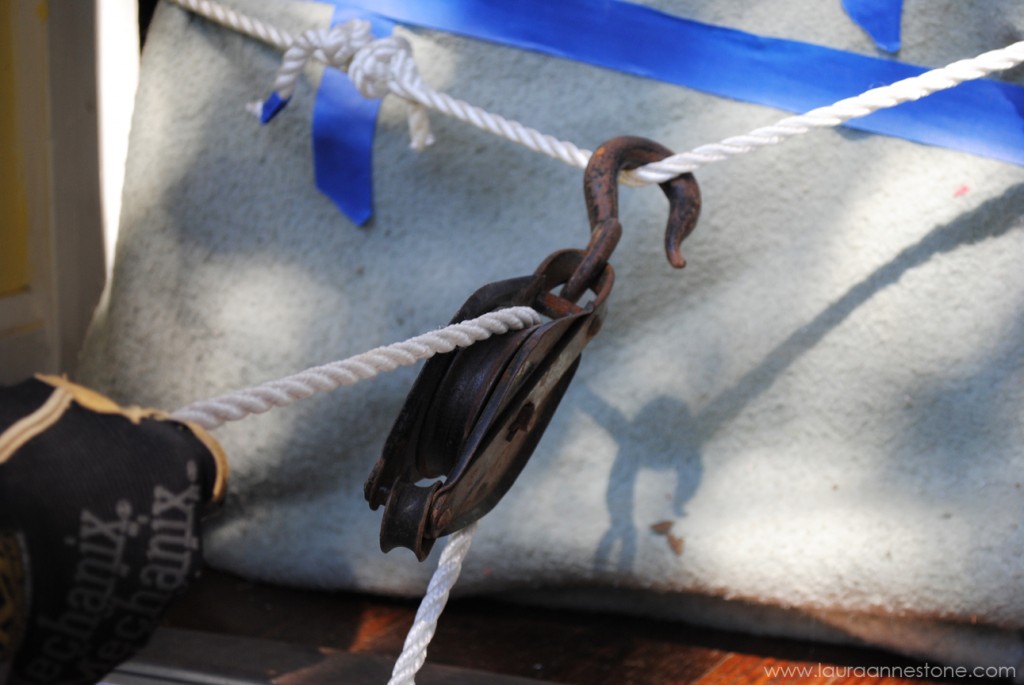 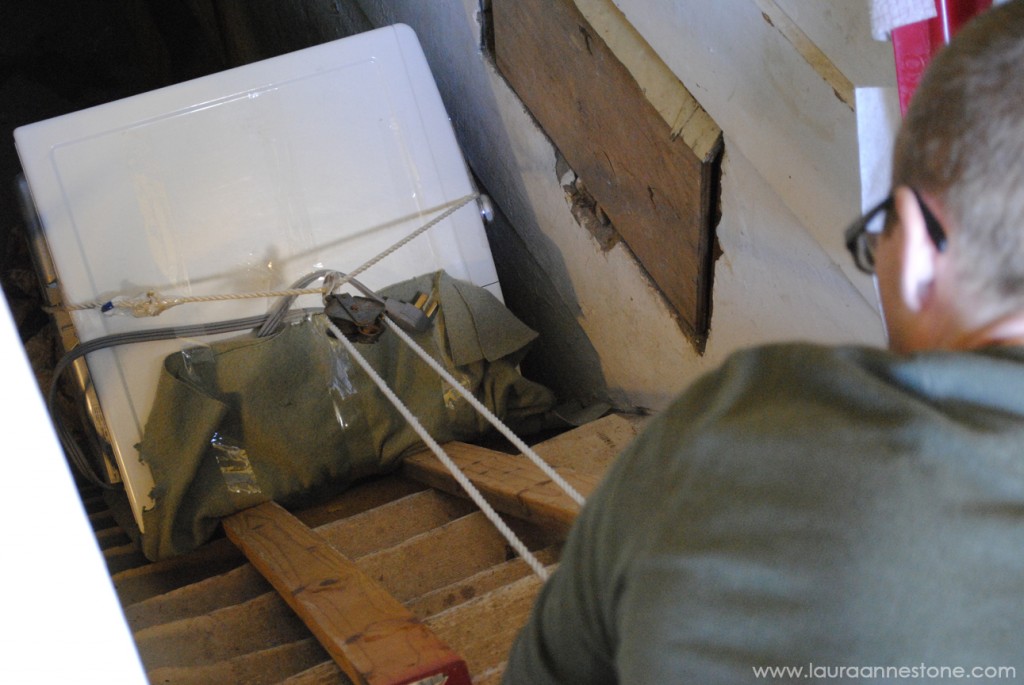 It got hung up at the very bottom. “Keep tension on it, I’ll go down there… unless you want to hop over it.” Nope. 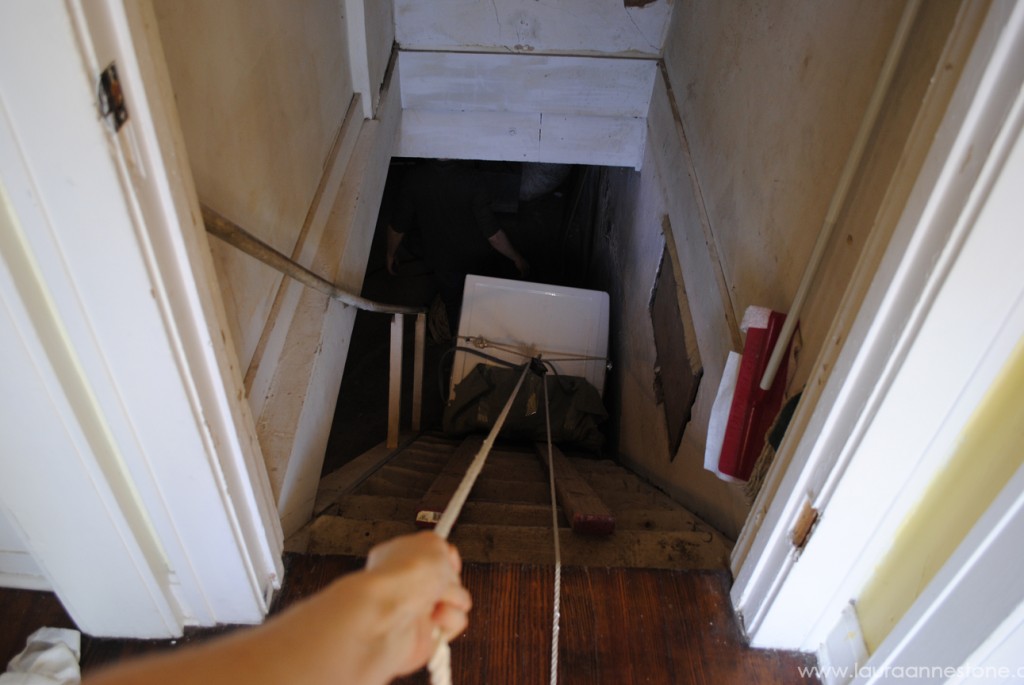 Whew, we made it! 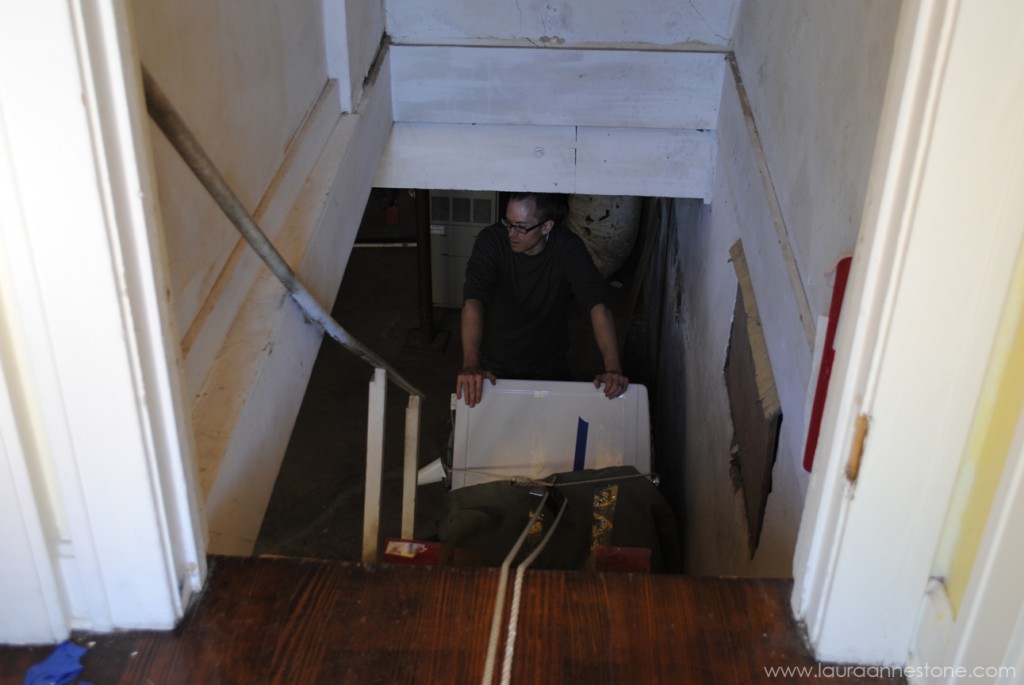 Some of those photos might have been of the dryer on its way down, the process was the same but with a slight delay. We started with our washer, then we realized we had to get the old washer and dryer out. That worked exactly the same… but backwards. It was actually alright until the rope nearly slipped off the corner of the old washer. There’s an air handler a few feet from the bottom of the stairs so although we don’t need the 80s washer we’d sure like to avoid replacing a smashed HVAC system.

Anyhow, everything worked out and we’ve now done two loads of laundry. It’s so nice to know we have one less thing on our major to-do list.

Posted in House & Home and tagged my home