Before I get to the casing frame rebuild, did I mention it rained the night after we started this project? No? Oh, well let me elaborate.

We went to bed sometime after midnight knowing the city was expecting rain. Except it wasn’t rain, it was a watery nightmare. A blowing, pouring, lighting-and-thunder show, movie-style nightmare storm. Jeremiah woke up when the it started to get heavy at about 3 a.m. He went downstairs, then ran back up to get dressed and to find towels. Buckets and buckets of water were pouring in through the chipboard “window” and the replacement wood header board and the everything. I mean it was literally streaming through like a sieve. One of us was wringing towels into buckets, the other running the buckets to the sink. We actually had to take turns running the buckets because our hands would get raw from twisting the soaking towels. We were battling this mess for about an hour and a half before I realized “Oh no! The basement!”

The basement has a few leaks, the largest of which is from a crack in the wall adjoining the crawlspace. Typically during really heavy rain, water streams in and, because the original floor drain was plugged but the floor was never leveled, the water collects about six feet from the sump. When there is a heavy rain we just go down and sweep the water toward the sump and then drain the sump. Sure enough, the low spot had water. Since the storm had calmed to just a drizzle, I told Jeremiah I’d handle the basement so he could get some sleep. An hour or so later, after running between the basement and windows, everything stopped leaking and was reasonably dry.

Jeremiah went to work to check emails then we set up fans to dry out the walls and were getting the rest of the water mopped up. Just before noon we started setting up to work on the windows when we heard a chopping sound. It hit us about the same time and I think we simultaneously said “Is that in the basement?”

The chopping we heard was the box fan I’d set up chopping through the several inches of rising water. Because it had stopped raining, and I’d already pumped out everything that morning, this was very confusing. Where was it coming from and why the hell was there so much of it? (A quick online calculation says that the large hole and sump was holding about 450 gallons of water – and it was rising -let alone whatever was collected on the floor – also on the rise.) 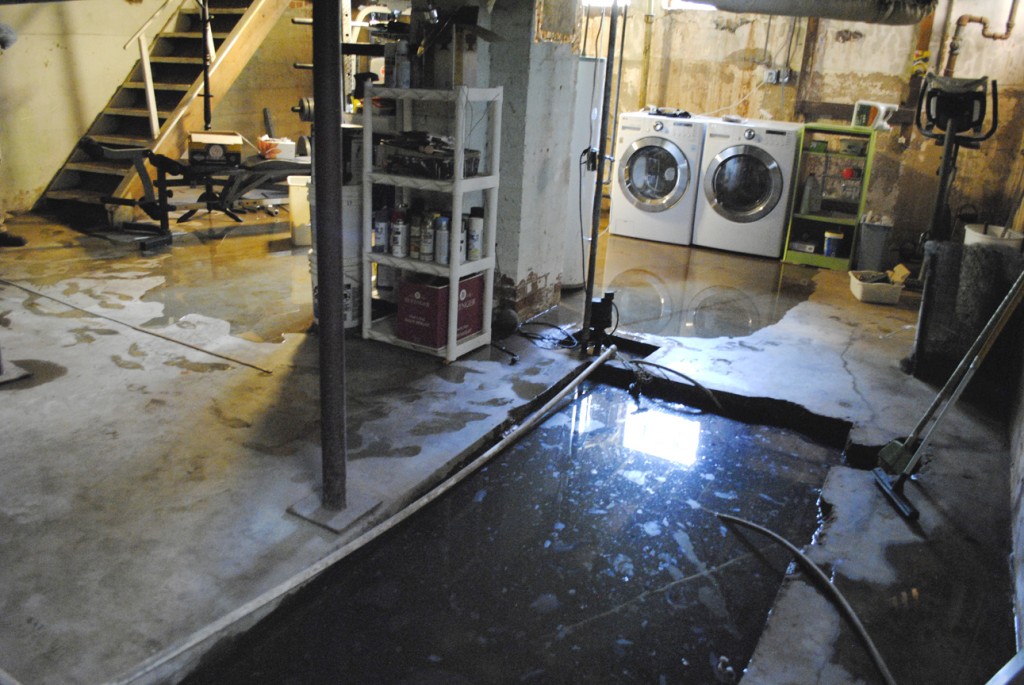 The large pool is where the original boiler sat and is approx. 5’x10′ and about 1′ deep 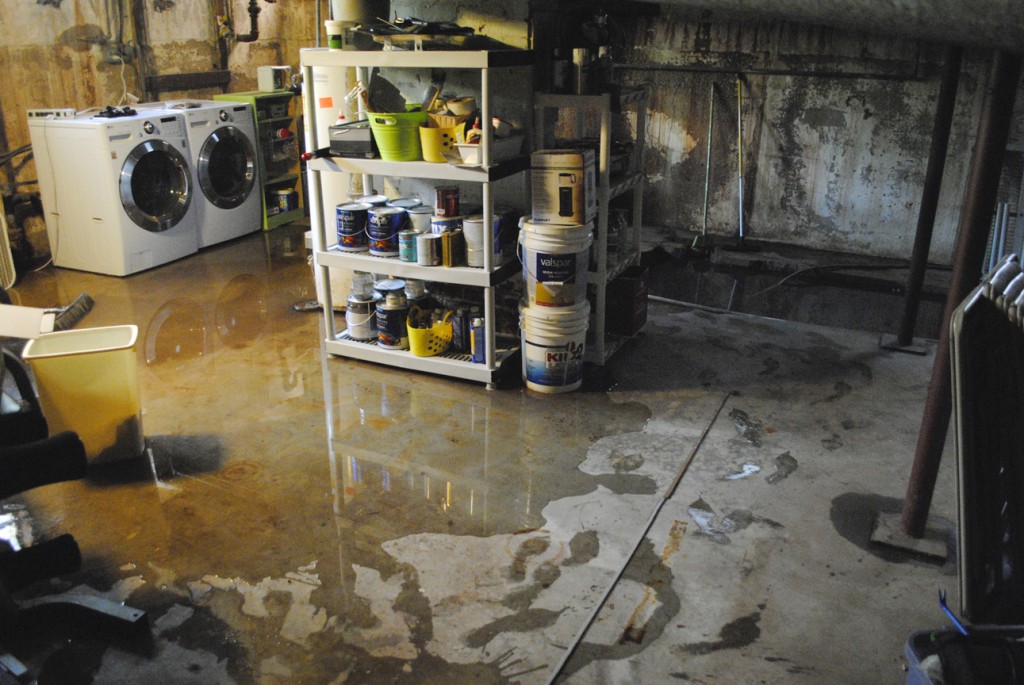 The water was threatening the water heater and our washer and dryer but the pump we had was no match. I had to go buy another one, which was especially fun since the road I would usually take was still blocked due to the morning’s flood.

I got it hooked up and got most of the water under control only to realize it wasn’t stopping. Seriously, where the hell was it coming from?

Unfortunately the flash flooding associated with the night’s storm overwhelmed city lines. The back-pressure had actually ruptured the plugs and seals at all the drains going into the basement floor, including the actual floor drain filled with concrete. It was bubbling up like a spring from everywhere a pipe went into the ground as well as anywhere the earth was exposed (like, you know, the entire floor of that big ass pool in the pictures above). What’s worse is that it wasn’t all groundwater and storm runoff. Every time someone flushed a toilet or washed their hands, I’d see a surge of water (just water, thankfully),

For hours and hours my galoshes I swept and rotated pumps, swept and rotated, checked water lines, moved water lines, swept and rotated pumps some more. All I could think was “I can’t do this all night” and “I just want to take a shower and get some sleep.” At one point, one of the pumps overheated and siezed up, then a few minutes later the other did the same thing because its line became clogged. I was standing there holding my broom like a bat trying to talk myself out of smashing everything within broom handle distance.  If I hadn’t been so tired I think I would have started crying.

Thankfully I got them both running again and eventually everything drained out. It was like magic. I finally had to take a minute to get some water (irony, huh?), and when I came back everything was gone. I heard later on the news that at about the same time the city lines finally cleared and roads were beginning to open up again. Whatever, I didn’t care. I just knew I could finally take a shower and go to bed.

Posted in House & Home and tagged husband, my home